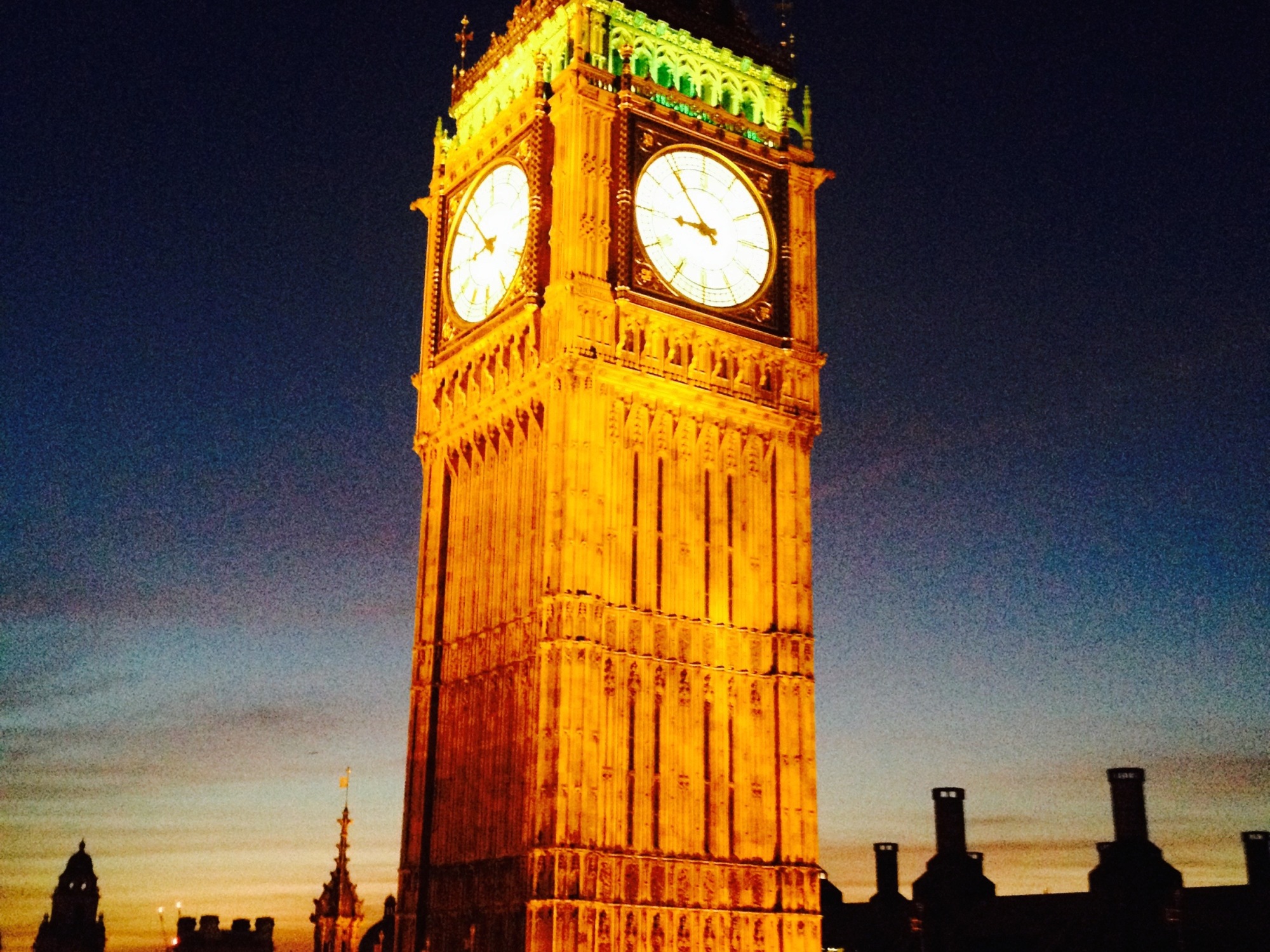 This week, MPs have returned to Parliament from their summer recess. As they walk through its corridors, drink in its subsidised bars, and plot in its tea-rooms, I wonder how many MPs stop to ask: Who actually owns this place?

‘The people’, surely? Dream on. Ok… the Speaker of the House? Nope. Alright, the Government?

No, no, no – as one of Parliament’s more forthright politicians once said.

The answer is altogether more troubling. But before I reveal who it is, a bit of Parliamentary history is needed as context.

The State Opening of Parliament each May is the country’s greatest spectacle of pomp and ceremony. But buried amidst the profusion of ermine, gleam of gold and archaic pageantry, there is a blunt assertion of power; a political narrative that goes to the heart of the modern British state.

The monarch attends the State Opening to read out the Queen’s Speech, announcing the Government’s legislative programme for the coming Parliamentary session. She is permitted to enter the Lords and deliver her Speech from the golden Royal Throne. But the monarch can travel no further. Black Rod is sent from the Lords to summon MPs to hear the Queen, and knocks three times on the door. But “the door of the Commons is slammed in Black Rod’s face to symbolise the Commons’ independence.”

This crucial rejection of the monarch’s remit dates back, of course, to the Civil War. It originates in Charles I’s attempt to arrest five MPs within the Commons chamber, the last straw in a succession of abuses by an over-mighty and incompetent monarch. It reflects Parliament’s subsequent armed rebellion; its assertion of Parliamentary sovereignty; its execution of the king and imposition of a Republic; and later, in fits and starts, its shaping of a constitutional monarchy. Since 1642, no monarch has set foot in the House of Commons.

And yet it appears that the Queen has quietly asserted her claim to own Parliament. 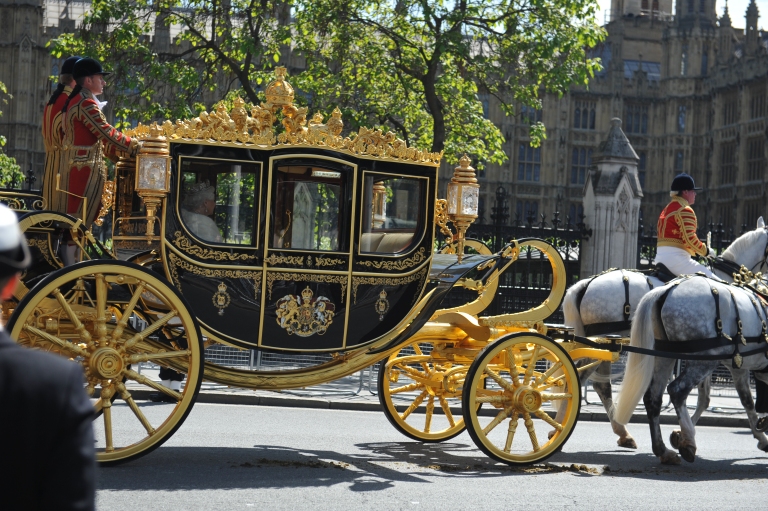 Parliament started out in the medieval period as a Royal Palace. That’s why it’s still referred to sometimes as the ‘Palace of Westminster’. But in the 1530s, Henry VIII departed the Palace of Westminster for the more sumptuous Palace of Whitehall just up the road. (It later burnt down.) Still, the Crown’s claim on its old lodgings remained.

The times seemed to be a-changin’ in the swinging Sixties, when Labour Prime Minister Harold Wilson announced in March 1965 that the Queen had “graciously agreed that the control, use and occupation of the Palace of Westminster and its precincts shall be permanently enjoyed by the Houses of Parliament.” Turning to the Speaker, Wilson declared that “control of the accommodation and services in that part of the Palace and its precincts now occupied by or on behalf of the House of Commons shall be vested in you, Sir, on behalf of this House.” The Prime Minister elaborated the details in a statement, ‘Control and custody of the Palace of Westminster’.

On the face of it, this seems to have been another example of Wilson’s modernising Labour government, reforming and updating Britain’s tired old institutions for the era of the ‘white heat of technology‘. (It also probably helped appease die-hard republicans in Wilson’s Cabinet, like Tony Benn, who refused to kiss the Queen’s hand when he joined the Privy Council). But read Wilson’s statement carefully, and you’ll see he never once mentions ‘ownership’ of Parliament, simply ‘control’. In an era when politicians spoke constantly about public ownership of industry, this omission was surely significant.

The ambiguity is present, too, in a recent talk given by none other than Black Rod. The transcript records his rambling, confused explanation 0f who owns Parliament to an audience of students. “The Palace of Westminster was a royal palace – it still is partly a royal palace – from the time that Henry VIII moved out in the early 16th Century until 1964″, he states (my emphasis). He goes on: “It was only as recently as the mid ‘60s that the House of Commons has actually owned its own premises – I’m not sure they have the freehold as such – but they have control of their own premises, around the Palace of Westminster, where there’s green carpet and green upholstery”. (My emphasis again.)

So what Black Rod is suggesting is that the Commons don’t actually own the freehold to Parliament, and the surest guide to what they control is the colour of the carpets.

So I decided to check the Land Registry’s title register for Parliament. And lo and behold, the Commons don’t claim to own the freehold. But guess who does? Yep, the Queen.

It appears that The Crown Estate, acting on behalf of the Queen, quietly lodged a ‘Caution’ in 2008 over anyone else seeking to register their ownership of the Houses of Parliament.

Their caution asserts “That the Queens’s Most Excellent Majesty is interested in the land as beneficial owner in fee simple in right of Her Crown.” A ‘fee simple’ is a form of freehold ownership.

The Crown Estate Commissioners have done this under the terms of the Land Registration Act 2002, which allows the Crown to register an interest in otherwise unregistered land.

The Land Registry’s title plan for Parliament showing what the Queen is ‘interested’ in, edged in red, is also instructive: it doesn’t cover the full footprint of Parliament, but stops short of the Victoria Tower. That, it seems, is because the Monarch already owns this bit. Black Rod claims that “When the Queen gifted to the House of Commons and the House of Lords their respective premises she retained some royal apartments in the palace – she retained the Sovereign’s Entrance and the Norman Porch staircase, the Robing Room and the Royal Gallery”. As this old but detailed plan of Parliament shows, all these rooms are in the southernmost wing of Parliament, below the red-lined land parcel the Queen has more recently asserted an interest in. 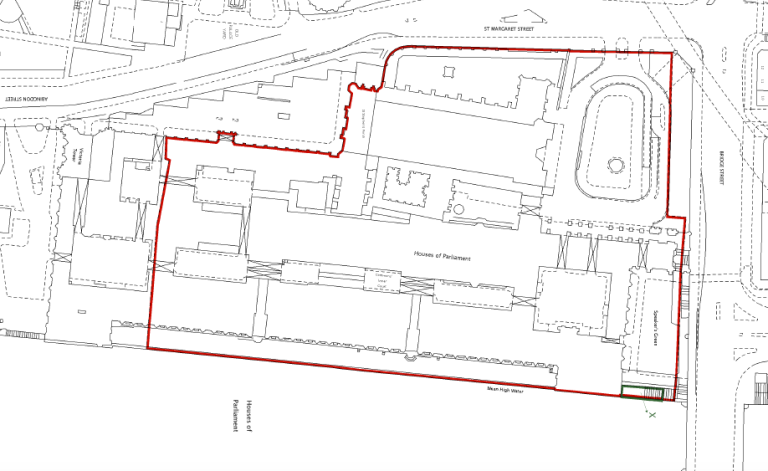 You don’t have to be a lifelong republican to think this situation is a little… odd. The confusion over who owns Parliament illustrates a broader truth about the muddle of British politics: that Parliamentary sovereignty rests on tradition and the tolerance of the Crown, rather than on a codified constitution. Who owns the land on which the Commons meets is only a small, perhaps trifling part of that. But just as the State Opening of Parliament shows, symbolism matters in politics.

I think there is a way the muddle could be cleared up, and Parliament’s ownership of the spot where it meets clarified. Parliament should quite simply register itself with the Land Registry as the owner of the Houses of Parliament. In doing so, it may well provoke a reaction from The Crown Estate Commissioners, in defence of Her Majesty’s interest in the land. But MPs ought to relish the challenge. After all, wasn’t Brexit all about reasserting the sovereignty of Parliament?

8 thoughts on “Who owns Parliament?”