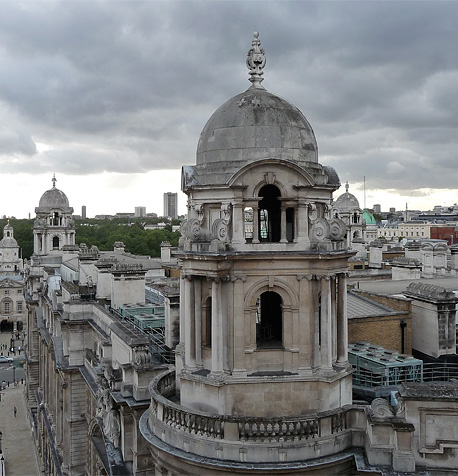 Image: © Copyright Stephen Richards and licensed for reuse under this Creative Commons Licence.

Whitehall – the street stretching from Parliament to Trafalgar Square, lined with Ministries and home to the Cenotaph – has long been a metonym for the UK’s central Government. Its imposing buildings of white stone and neoclassical design, Victorian and Edwardian in origin, contain literally miles of corridors. But though these corridors of power comprise the heart of the Government estate, they are far from being the whole of it.

As of 2016, ‘Whitehall’ owns some 192,588 acres across Great Britain and Northern Ireland, spread across 25,544 properties and land parcels. I found this figure by using the handy Government Property Finder service, a Cabinet Office unit set up in 2014. The service combines a laudable commitment to transparency with, in my view, a slightly more suspect whiff of small-state ideology, encouraging the public to “challenge government to sell land or property if you believe it’s not needed”. (By all means, let’s make better use of our land, but why not open up the Land Registry, and let the public contest all land ownership, public and private? But, I digress.)

That figure of 192,588 acres can be found if you download the entire Government Property Finder database (here’s a spreadsheet I made earlier). It’s an incomplete figure: as I wrote about in an earlier post, Ministry of Defence military sites were previously listed but since deleted, though not before I downloaded a copy. MOD military lands add some 750,000 acres to the total, whilst the Forestry Commission estate adds another 2.2 million. But nearly 200,000 acres for the rest of the public sector isn’t to be sniffed at.

What does it comprise? Here’s a breakdown of some of the main holdings by Departments and Agencies:

*I’m not convinced this is everything Network Rail own – a future post, perhaps.

But, you ask, where are all these government-owned bits of land and property? The Property Finder database has postcodes and point-locations, but since I’m trying to map who owns England, I needed proper maps. So, I asked them.

I started by asking the Cabinet Office for all land owned by DEFRA, DECC (as was), and their respective Agencies (like Natural England and the Nuclear Decommissioning Authority). Success: the GIS map they gave me can be viewed in this Google Fusion Table (screengrab below). You can see clearly Natural England’s nature reserves, the Environment Agency’s flood defence assets, the nuclear sites tended to by the NDA, and more besides.

But when I went back for a second try, asking for a map of everything else owned by Whitehall, I was rebuffed. “The Cabinet Office is unable to comply with your request”, I was told, because it would “exceed the appropriate limit… of £600”.

That struck me as odd. Sure, generating maps of all those 200,000 acres would cost time and money; but if the task had already been done for DEFRA and DECC (two of the least well-funded departments in Whitehall), why not for the bigger, more land-rich departments? Indeed, if you use the online map function on the Government Property Finder website, and zoom in to view properties for all Whitehall departments, you start to see mysterious brown polygons beneath the marker pins, tracing out what appears to be Government-owned land parcels.

The reality, I suspect, is that all or most of Whitehall’s land has already been mapped; but an obstacle, technical or political, remains in the way of its release. Indeed, a contact at the Cabinet Office told me that “we’re working on providing the information you require as part of our improved data transparency. We’ve encountered a technical issue which we’re working to resolve.” It’s just a shame that you have to go outside the formal channels to elicit such a reasonable response; so much of the public sector still doesn’t ‘do human’.

In the meantime, I opted to narrow down my request, asking for maps of a few of the other most interesting land-owning Departments and Agencies. I’ll do a fresh post if I’m successful in getting them.

What would be really revealing would be to see what Whitehall owns now, versus what it owned in the past. What’s been sold off? What’s been considered worth keeping? As former Tory Prime Minister Harold Macmillan once said, at the height of Margaret Thatcher’s privatisation drive: “The sale of assets is common with individuals and states when they run into financial difficulties. First, all the Georgian silver goes, and then all that nice furniture that used to be in the saloon. Then the Canalettos go…”. Whitehall’s cupboard these days may be looking rather bare. But surely it’s time to have a decent map of where the remaining family silver is, before our political masters decide to flog off any more of it.

7 thoughts on “What does Whitehall own?”