Prince Charles – Prince of Wales, Duke of Cornwall & Rothesay, High Steward of Scotland, Lord of the Isles, etc – is the largest private landowner in England. In his capacity as Duke of Cornwall, he owns an estate of some 135,000 acres, spread across 23 counties.

The Duchy of Cornwall is one of the strangest beasts in England’s still quasi-feudal political economy. It’s not a company (and so doesn’t pay Corporation Tax). It’s not a charity. It’s not a public body (though it is accountable to the Treasury, and Parliament) and it’s not subject to Freedom of Information law (though it is subject to requests under the Environmental Information Regulations, in its narrow capacity as a harbour-master). It is, in short, something of an anachronism – but one that has survived for nearly 700 years and continues to grow in size.

The Duchy was created in 1337 by Edward III, as a personal endowment for his son, the Black Prince. Ever since, its lands and revenues have belonged to the male heir to the throne – in recent times, Charles, Prince of Wales. (Note that in the absence of a male heir, the Duchy reverts to the Sovereign; another discriminatory anachronism.) Prince Charles can’t simply do what he likes with the Duchy, mind; its capital assets are held in trust and he has no access to them, and the Treasury must approve all land transactions over £500k. Nevertheless, the Prince receives a healthy annual income from the Duchy, and he plays an active role in the management of the estate.

The Duchy is open about its size – “around 53,000 hectares” (c.130,000 acres; Kevin Cahill in 2001 estimated 141,000 acres) – and its website and annual accounts paint a reasonable, if incomplete, picture of its extent. But others who have sought more details on what land it owns have been rebuffed (such as this attempt to use an EIR request to get a list of the Duchy’s land and properties). When I cheerfully asked the Duchy over email for a map of their landholdings, reply came there none. Well, it’s always worth a try.

But, dear reader, I’m not one to be easily put off. So I’ve searched high and low for every scrap of information on what the Duchy owns – from news stories, formal accounts and websites, to an academic study of when the Duchy’s lands were sold off by Parliament after the Civil War.

My most useful source comes from the unlikely pages of National Geographic magazine, in an article on the Duchy of Cornwall they published back in 2006 – complete with this handy map: 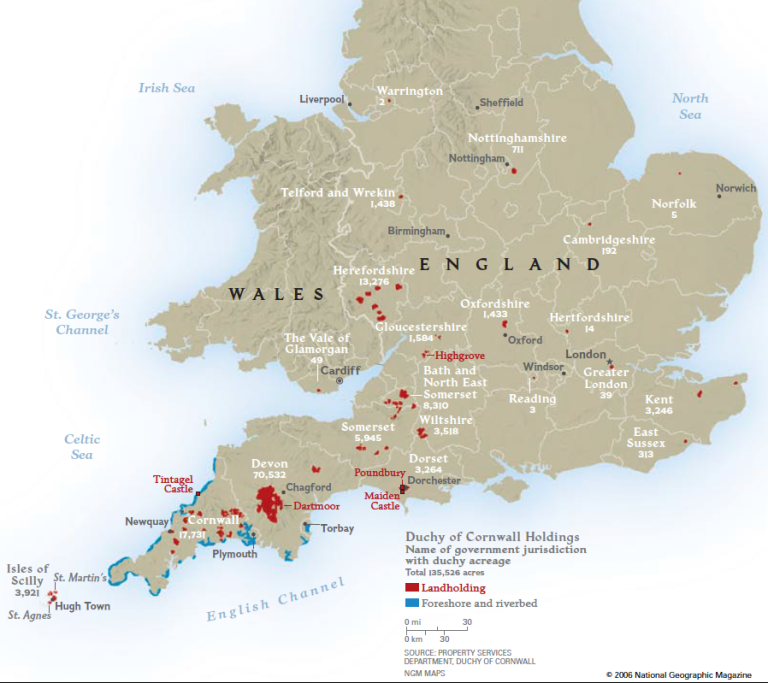 With the exception of one smaller, lower-res and unattributed map I found on Pinterest, this is the only map I can find anywhere of the Duchy’s landholdings. The Duchy’s own website contains one map of its land on Dartmoor, but no other maps. Update, 15th March: Miles King (@MilesKing10) has flagged up this presentation on the Duchy by the Tenant Farmers’ Association, which includes a good map of the Duchy’s landholdings on slide 8.

You’ll notice that the National Geographic map includes a total acreage for the Duchy of 135,526 acres – mid-way between the acreages stated by Cahill and by the Duchy themselves. Whilst this assessment is now over a decade old, its precision – and the detailed breakdown it gives by county – means I’ve opted to use it as the basis for my own analysis. Either way, the Duchy in the twenty-first century is nearly twice as large as it was in the Victorian period: the 1873 Return of Owners of Land recorded it as being just 74,113 acres. And these are just the landward acres: in addition, the Duchy owns around 100,000 acres of foreshore and 14,000 acres of estuarial river beds in Cornwall and Devon.

Useful as the above map is, it doesn’t give a whole bunch of detail on each of the red splodges denoting landholdings. So using it as a guide, that’s what I went in search of. Here’s everything I’ve found, in Googlemap format, followed by a table of results.

Why does all this matter? Because it’s the private estate of the heir to the throne and the largest private landholding in England; and because transparency and accountability matter in public life. There is little doubt that the current Duke runs his estate on eminently sound principles: concern for the environment, a desire to provide affordable but attractive and quality housing, the creation of long-term value. But what’s to say a future Duke of Cornwall would behave so responsibly?

This is the enduring problem of our uncodified constitution; stable in many ways for having accumulated gradually, but also ripe for abuse. After all, by convention, the heir to the throne does not lobby Ministers on policy matters; but Prince Charles has broken that convention, as his ‘black spider letters’ show. Even if the Duchy were to maintain its pretence of not being a public body, and avoided being made fully subject to FOI requests, a more complete set of annual accounts including a detailed map of its current capital assets seems in order.

As things stand, it’s unclear whether the Land Registry will include the Duchy in their free release of corporate and commercial land data this Autumn: one of the land titles I have for Duchy property gives the registered owner as being “His Royal Highness Charles Philip Arthur George Prince of Wales… in right of his Duchy of Cornwall”. If the Land Registry deems this to be land registered in an individual’s name, then it will be exempted from free release.

But then, concealment of wealth is all part of preserving it. And the Duchy – like the Crown and the Peerage, feudal remnants all – are past masters in surviving.

30 thoughts on “What land does the Duchy of Cornwall own?”